The Story of Everest Attack

A couple of years ago I read the book "Into Thin Air: A Personal Account of the Mt. Everest Disaster" by Jon Krakauer. It tells the story of the Mount Everest Tragedy in 1996. I also read "The Climb" by Anatoli Boukreev and "Ultimate High - my Everest Odyssey" by Göran Kropp. Boukreev was one of the main guides and was in part blamed for what happened. Göran Kropp turned down only one hour from the summit on the day before the catastrophy.

I was faschinated by the story. The locations, the psychology, the characters, the drama...

To make a game about Mount Everest came up as an idea about then. I had a strong notion about the gameplay. I wanted to focus on the locations and the people. The player should have to make one type of decision only: when to climb. The idea was also to let the game circle around three main attributes of the climbers: Condition, Acclimatization and Morale. Further I wanted time and locations to be as accurate as possible. The game takes place april 18 to may 31 which is when real expeditions are set. The simulated climb times are as realistic as possible. For example a climber in reasonably good condition takes 5-6h to climb Lhotse Face.

I wrote three or four versions of the game in GameMaker. They were playable games but I was not satisfied. The game model started to be rather complex and was hard to maintain in an environment that was not fully object-oriented. Also I new that I wanted to target iPhone but GameMaker did not give me any help with the GUI. 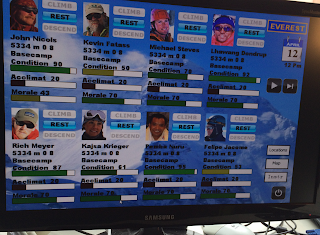 
To use the GameMaker iPhone bridge you had to first become a licensed Apple developer. After becoming licensed I started to browse a Apples programming resources and the XCode environment.

I have programming background (some years ago) but I didn´t think I had the stamina to learn a completely new programming environment again. I had also heard that Objective-C and Apples whole environment was rather intimidating. I browsed around, looked at the documentation and some tutorials. Suddenly I found something called CS193p and I was hooked...

CS193p (it has changed name recently) is an advanced course in iPhone programming on Stanford University. It is made available online on iTunes University. The course consists of 14-15 real lectures and 3-4 large programming assignments. The real lectures are simply filmed and put online a day after they are held at Stanford. It is lead by an excellent teacher named Paul Hegarty.

The first time I started to look at the course I was stuck around lecture three or four. I understood most of it up to lecture 4 but I realized why I was not a Stanford student. I must have watched the first three videos ten times. But I was in love with the academic style, the complexity, the details. The voice of Paul Hegarty could be heard many hours a day both in my home and at my office. I started to become obsessed with programming.

Two years later I have read 10-15 books around Objective-C, app development, Swift and game design. I am going through the fourth version of CS193p right now. This time in 100% Swift.

One of the first small projects of my own was a simple game that I called Turtliac. It is a Flappy Bird Clone and programmed from scratch in pure Objective-C. No templates or such. It was my "hello world" as a game programmer and I was very happy when I got it accepted for the App Store. 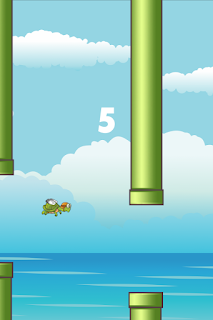 
I also started to build a game called Fishy Tank. The idea was to make a strict master-detail application with only two screens, very standard iPhone UI but yet interesting gameplay.
The game simulates a fish tank with different species that eat each other and the goal is to maintain balance and to have as many species as possible in the tank at the same time. I bought stock graphics from Graphic River and I think the UI is rather cute. But I don´t know if I will publish the game. 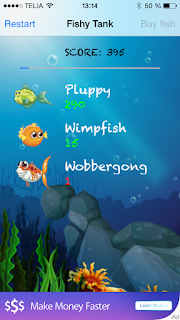 But I also worked on Everest Attack. I was close to surrendering the project many times but came back to it. I started over with completely new versions of the game 6 or 7 times. I tried to build some versions completely with a raw state machine model and no UI. I also tried different types of UI. 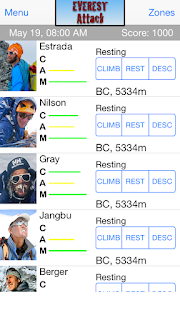 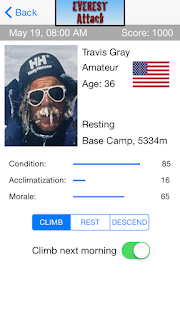 In the winter of 2014 I decided to let someone help me with the graphic design. Until then I had used placeholder photographs. I wanted real portraits that I had the full rights to. I also wanted a new map for the main screen.
I put out a request on eLance (www.elance.com) and got around 20 frelancers offering to do the graphic design. In the end I choosed between a chinese and a spanish designer. I went for the spanish designer in the end and she got to do the eight climber portraits, the map and a lot of the rest of the new GUI. The cost in total was $650. The retro feel of the portraits was the designers choice. I never had that as a requirement.

One of the main benefits of hiring a freelancer for me was that I now had to settle with what I had. If I had done all the design myself I had probably never stopped changing in it. 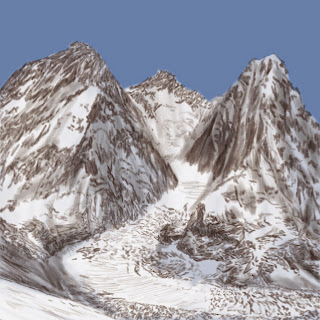 I hope to have the game published very soon now. The basic model of the game and the gameplay is almost exactly what I had in mind three years ago.

In a few months from now I hope to have my "hello world" as a small indie game company in place. It will consist of:
With this in place and all the knowledge aquired in the progress - I hope to start completely new and more ambitious app and game development projects in the fall of 2015.

In the Turtliac game the turtle has the recorded voice of my eleven year old son. I asked him to say something when the turtle makes a loop and he spontaneously went "jabatoba!". That is how the name of the company came up.

Jabatoba AB was registered as a company in July 2015.
Everest Attack was released on the App Store in August 2015. It was first released as free to play with ads but I have recently changed the model to premium with a price of $2.

I have also recently started to cooperate with a small game studio in Skövde. I plan to let them help me with the next version of Everest Attack.

I have released a Tarot app. The background was that I realised that all pictures and interpretation texts for Tarot was common domain since it is so old.

I also had some kind of idea of a Tarot Deck that was spiritually printed with the soul of the owner. The same way as a physical deck is. So in my app there are no random or time-based algorithms. The deck is shuffled only by direct manipulation.

Everest Attack 2 now has completely new graphics, a new map layout, more concepts, a much better tutorial and a new messaging system. I am working hard on the balance and the testing of the game.
I hope to release the game directly after the summer. But I am also thinking of releasing the game in a little more professional way.

Everest Attack and My Tarot Deck are purchased at a low but steady rate on the App Store. The Tarot app has almost no downloads on Google Play.
I have experimented a little with Apple´s Search Ads but with very low funding. It seems to me that Everest has a rather good conversion rate for a premium game. A high percentage of people visiting my App Store page buys the game. 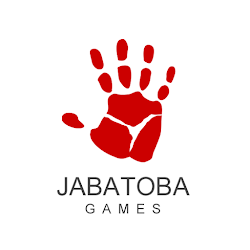